As Brazil prepared for a second round in its Presidential election - an election already infamous for the wide dissemination of ‘fake news’ propaganda through the WhatsApp application - we implemented a beta roll out of our new web application MyActionCenter® to effectively coordinate activists and counter a deluge of false information by connecting real people and their communities.

MyActionCenter® enables organizations to quickly deploy an online action center for supporters using the NationBuilder system, and easily recommend real world and online actions ranging from events to petitions to fundraising. After signing into the web app, activists receive a list of possible actions customized for their interests. As users perform actions, they earn points. Upon completing their goal for the cycle, they win badges.

In only ten days, 60,000 activists registered and completed more than 250,000 actions generating a significant impact on behalf of the campaignin the final weeks prior to the Brazilian presidential election. 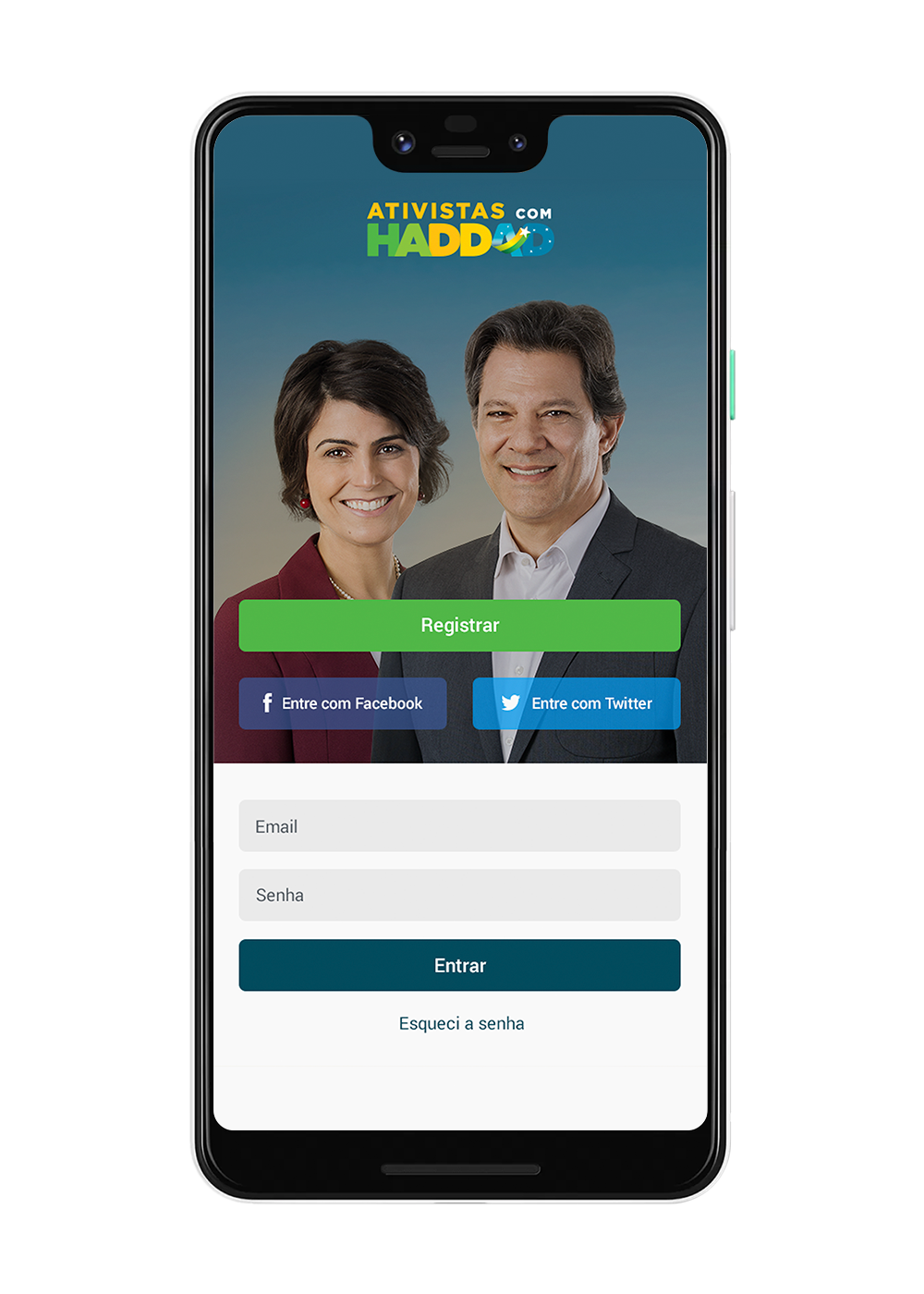 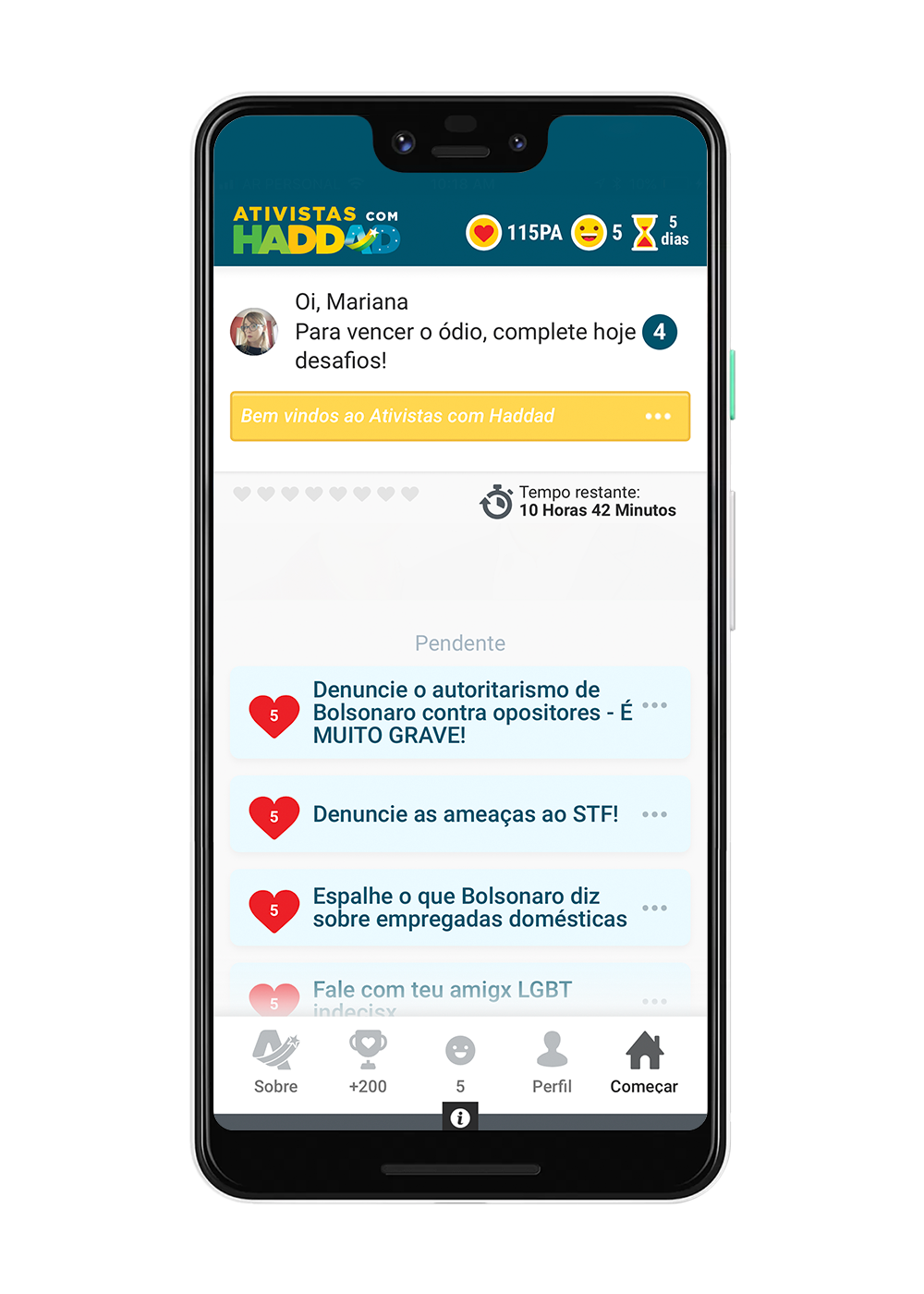 A few years ago, a President Jair Bolsonaro would have been unimaginable in Brazil, the fourth largest democracy in the world with a two decade-long track record of progressive leadership. Bolsonaro - a former military man who used to be interviewed on one of Brazil’s comedy shows as the kind of person that no one could take seriously - his views so extreme they were ridiculed and declared ‘fascist’. Even Marine LePen, hard-right icon of France, said, “he makes utterly atrocious remarks”.

Bolsonaro’s win is inline with a global trend toward authoritarian and populist forces, including the “No” vote against the peace agreement in Colombia, Brexit, Trump, and the Philippine’s Duterte, among others. Many of these elections share a strategy of deliberate fake news and anti-establishment sentiments sent through social media.

Fake News and an Almost Fatal First Round

Bolsonaro’s digital strategy rested on the use of WhatsApp to spread fake news. This was particularly successful as WhatsApp - a free alternative to costly SMS text messages in Latin America - is widely used in Brazil to connect groups from families to social networks.

One major false information effort was funded by a group of Brazilian corporations (likely in violation of campaign laws) to spread tens of thousands of fake news. These messages were forwarded to WhatsApp groups, which became the largest source of election information for Brazilian voters. One study showed that more than 90% of the Brazilian electorate believed news that was demonstrably false.

The Partido dos Trabalhadores (PT), the main Party running a candidate against Bolsonaro, struggled against various contextual challenges - their popular candidate and frontrunner in the polls, former President Luiz Ignacio “Lula” da Silva, was barred from running several weeks prior due to corruption charges that were quite possible politically motivated. His replacement, Fernando Haddad, a lesser know former mayor of Sao Paulo, struggled to fill the vacuum left by Lula.

The first-round results were a disaster for PT. Bolsonaro came close to an outright win with 46% of the vote to Haddad’s 29%. Historical data gave him a 96% chance winning in the second round scheduled for two weeks later.

In this challenging environment, we saw an opportunity for our newest digital organizing product MyActionCenter, to make a difference.

MyActionCenter is a web app framework for the NationBuilder platform that enables campaigns and causes to provide real-world actions to supporters. After signing in, supporters are presented with a custom dashboard offering options for activities that are tailored to their interests.

While Tectonica is based in Buenos Aires, Argentina, our largest projects have supported campaigns in Europe, including Scotland’s SNP, London Mayor Sadiq Khan, and Groen in Belgium. We built a network of 400 candidate sites for  Emmanuel Macron’s En Marche which won more than 60% of the French National Assembly. The chance to leverage our experience in support of our neighbors in Latin America was particularly meaningful..

Within a matter of days we rolled out a custom version of MyActionCenter in Portugese and rebranded badges with hearts to align with the campaign’s positive message of hope.

After customizing MyActionCenter for its first implementation as ActivistascomHaddad.com, we were ready to try it out with real users. The plan was to test  with a small group of 100 volunteers on the first day. One of the proposed actions was to share the application and recruit friends. To our surprise, within two hours over 3,000 people signed up on the system and completed actions that the campaign had drafted. The organic growth continued steadily for the next few days reaching more than 57,000 users before the campaign first mentioned the platform.

Over ten days, activists performed over 250,000 actions on behalf of the campaign.The general approach was to connect people and fight fear-mongering and fake news through people telling their truths to their own communities.

Some of the most popular actions on the system:

Fake news against the PT candidates spread widely during the campaign. One action asked activists to respond to them indicating its falsehood, adding a brief account about how those lies were part of an orchestrated effort to disseminate fear and hate.
Total Actions Taken: 4900

Another related action reinforced user engagement by asking users to invite their friends to like PT profiles to galvanize their presence in social media.
Total Actions Taken: 2700

Thanks to Bolsonaro’s long dishonest campaign about Haddad, almost 7 out of 10 evangelicals would vote Bolsonaro, while among Catholics the preferences were more even. One action invited  users to look at their Facebook friends and engage their evangelical relatives, co-workers, and neighbours, to discuss the lies behind false claims used to inspire fear.
Total Actions Taken: 1200

The underlying theory behind the creation of MyActionCenter is that, for most campaigns and causes, there is a group of supporters who have a desire to do more but do not have a clear path to participate at a higher level. This theory was clearly proven in our first beta implementation in the Brazilian elections.

MyActionCenter is a tool that focuses on the most highly-committed supporters and connects them with actions that are relevant to their interests and powerful boosts for the campaign’s needs. By providing a set of actions, in daily or weekly cycles,those willing to engage at a higher level can do so as part of their regular routine. Think of it as project management for your supporters.

In the past, these high level supporters might have needed to gather at the local campaign office to do phone banking, canvassing, or other activities. They may have needed  to work their way up a ‘ladder of engagement’ before they even received such an invitation. Our new digital tools enable campaigns to lower the barriers for involvement and minimize friction  from busy schedules and transportation issues.

We built MyActionCenter with the belief that we can maximize the impact of activism by making participation-opportunities organized, distributed, personalized, accessible, relational, and habitual.

Organized: because opportunities need to line up with the needs of the campaign for winning, they need to have a connection to the overall strategy of campaign leaders with the larger vision.

Distributed: While the options of actions must have overall value to the campaign’s goal, they must allow for individual activists to choose where they might have the most impact in their communities and networks.

Personalized: Aligning actions with interests is key. In MyActionCenter, actions are customized to the specific activist on their dashboard. Actions and information can be shown based upon interest area, geographic location, demographics, past actions taken or any custom segmentation.

Accessible: As taking action for a campaign becomes more accessible - allowing activists to set their own schedules, and take actions when and where it’s convenient for them, vastly increases the likelihood of participation.

Relational: Supporters can make their impact on their own networks. Recruiting and interacting with an individual’s own networks is far more powerful than a campaign sending messages to strangers.

Habitual: Just like a monthly fee yields higher revenue than a one time cost, getting supporters to participate on an ongoing basis is key to maximizing value in activist’s contributions. MyActionCenter is based on cycles of actions - either daily or weekly. This helps create a pattern of activism that becomes a part of a supporter’s routine and over time yields higher gains for the campaign.

NationBuilder as a Base

Today’s market is full of digital organizing products. It seems like the approach of many is to build their niche application and then connect it with most of the major systems. To save time and cost, and maximize the tools for MyActionCenter, we chose a different approach: to build it directly on top of one of the world’s most-used and complete political organizing softwares: NationBuilder.

Building the web app as a framework on NationBuilder has the advantage, over building a custom native or web app, of not having to develop major components such as an administrator backend, user databases, or sign in features. The system already has the best in the industry leadership, communication, and organizing tools built in and immediately available in addition to the company’s support and security for political clients. For any advocacy or political campaign already on NationBuilder, the system can work as an additional tool, already fully connected with those other campaign efforts on the system.

Additionally NationBuilder is the only organizing system we know of that would technically make this possible. Unlike systems that plug in a Database CRM to a CMS like WordPress or Drupal, NationBuilder systems are fully integrated. What that meant for this system is that when an activist takes an action on the system the updates to their record in the database automatically impacts what they will view on their dashboard. The ability to do this is in no small part to the brilliance of the coders at Tectonica (with a tip of the hat to the genius Fernando Petroli) and the experience they have with over 100 projects launched for clients on the system.

Though Haddad was gaining significant support during the final weeks, he ultimately lost the election. The time was too short to make up lost ground. Along with other important efforts and intelligent strategic changes made by the campaign after the first round, the data shows the implementation of MyActionCenter played a role in closing that gap. 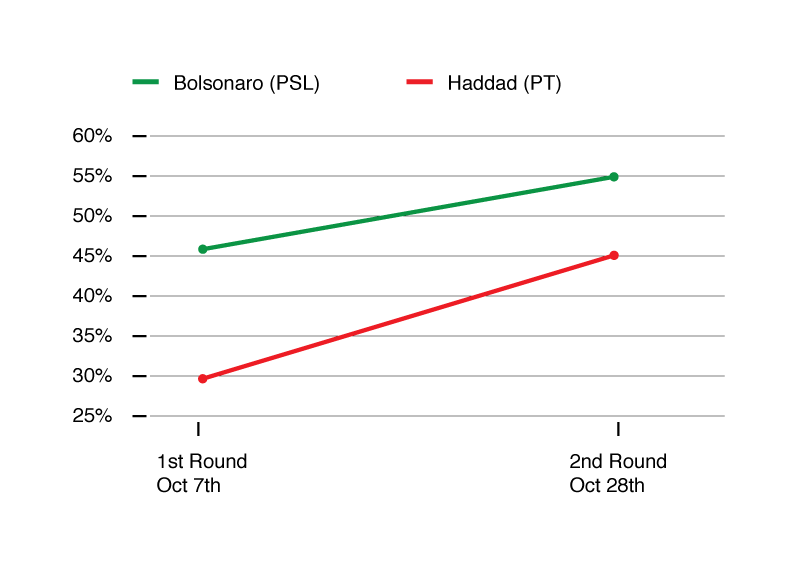 One stark lesson from this campaign is that a more coordinated effort is needed to fight the dirty tricks of false information being used by authoritarian candidates. We must share information for the best techniques to counter these underhanded methods. Campaigns should look beyond their own borders, learn from one another internationally, and be prepared for such attacks. We cannot simply rely on Facebook, Twitter, WhatsApp or other platforms to solve this problem.

MyActionCenter is one tool in a range of digital organizing tools and strategies to counter these methods like those used in Brazil’s presidential elections. The system is available for use by any campaign or advocacy effort that meets our ethical guidelines.

We continue to develop the product and have incorporated personalized news alerts as well as integrations with other organizing systems such as New/Mode and Call Hub for targeted advocacy work and distributed phone banking.

Request a Demo if you want to know better all the amazing things MyActionCenter can do.

Made with ❤ with NationBuilder by Tectonica